Remakes are all the rage in Hollywood, and what better original material is there than the Old Testament?

If you are not familiar with the Burj Dubai, it’s the tallest building in the world, and the construction isn’t even finished yet.  It currently stands about 2,275 feet tall, but they are keeping the final height a secret.  Some rumors state that the final height will actually be over 940m (about 3,055 feet, for US types).

Here is what it is supposed to look like when it is done:

Last week, I caught this article in Gizmodo, and it had this great picture in it: 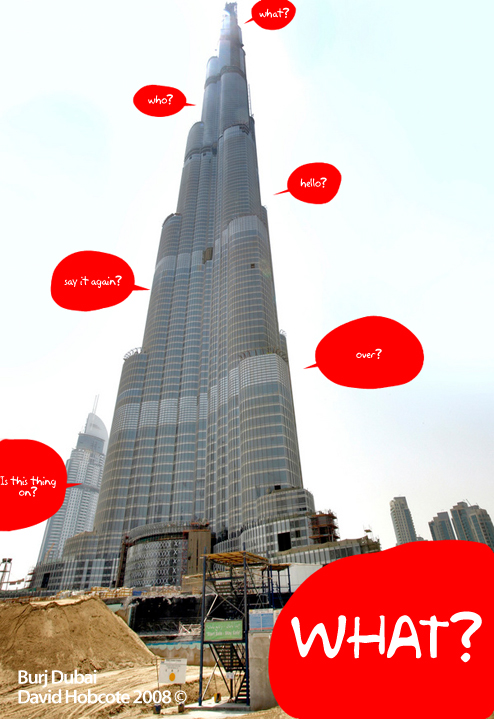 It seems that, like the story of the Tower of Babel, recently the building reached heights that interfered with the functioning of the construction site walkie talkies.  Literally, they built a building so high that they could no longer communicate.

When the unbelievable Burj Dubai started to get really high, the construction workers discovered one problem that seems obvious now: their walkie-talkies stopped working as they climbed the structure. The reason was simple: distance. At the beginning of the construction they used walkie-talkies—which are light, durable, and have a long battery life—across the site.

Not to get too biblical, but a quick synopsis of the original story:

According to the narrative in Genesis Chapter 11 of the Bible, the Tower of Babel was a tower built by a united humanity in order to reach the heavens. To prevent the project from succeeding, God confused their languages so that each spoke a different language. They could no longer communicate with one another and the work could not proceed. After that time, people moved away to different parts of Earth. The story is used to explain the existence of many different languages and races.

Interesting to consider… if just for a moment. Fortunately, there is a happy ending for the Burj Dubai:

Fortunately for them, they turned to mesh networks, which are similar to the ones used in mobiles, but local. For that they used a company called Firetide, using several Wi-Fi-enabled VoIP phones over a HotPort wireless mesh, which also serves as the transport for the security video in the site.

By the way, the Wikipedia page on the world’s tallest buildings is really, really fun to explore.