One of the best features of the new building that LinkedIn opened up at 2051 Stierlin Court in Mountain View is the new Coca-Cola Freestyle. The Freestyle is a modern soda fountain wrapped in a vending machine. You can order any one of over 100 different varieties of soft drink, ranging from flavored Dasani water to my personal (and discontinued) favorite: Diet Vanilla Coke. 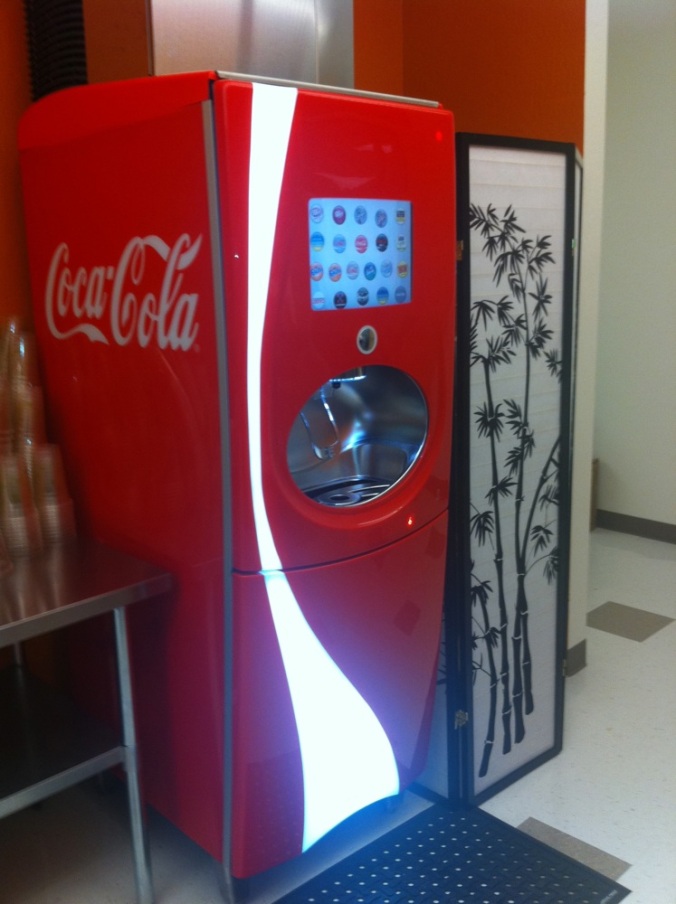 After playing with the machine for a few months, I’ve realized that Coca-Cola is sitting on a massive marketing opportunity with his machine, if they execute it aggressively. Obviously, coming from the social web, I have a particular angle on how I would leverage this new machine in the marketplace.

The Coke Freestyle may look like a vending machine, but it’s internals look more like a giant inkjet printer. It seems to have two types of cartridges: large bulky core soft drink syrups (e.g. Coke, Sprite, Diet Coke, etc) and smaller flavor syrups (vanilla, lime, sugar-free vanilla, etc). It combines these with a water source and carbonation on demand based with varying portions of each.

Thus, a small number of core flavors and accent flavors can deliver a truly breathtaking variety of soft drinks. My six year old, for example, delights in flavors of Sprite he never imagined (including a distinctly fluorescent purple “Grape Sprite”).

Most exciting of all, the machine is equipped with a Verizon USB wireless modem, and is IP-capable. Nominally, this exists so that the machine can report daily on its supply levels, allowing service to know which cartridges need restocking.

While the software on the machine is extremely primitive, it’s this networked capability that has the potential to turn the Coke Freestyle into a game changing marketing machine.

The first step in redesigning the software on the Coke Freestyle is to start crowd sourcing new flavors. With a few simple variables, Coke could take this machine from offering 100 different drinks to thousands.

Want a Barq’s Root beer with Cherry? You got it. Coke Zero with Lemon? Whatever floats your boat.

A very small set of options could really open up thousands of possibilities:

Now the fun begins. There are a number of game design principles we could apply here.

First, the machine could highlight the “top” custom flavors that have been recently ordered on the machine. This would serve as a mechanism to obtain “votes” for new flavors that expert users create.

To help mix up selection, the machine should also highlight recent choices or randomized choices to help ensure that a few custom drinks don’t runaway with the voting.

In a perfect world, this voting would be personalized. Maybe people can name their drinks and take credit for their creation. This could be done by making the machine accessible to nearby smart phones. (BTW This might be a great reason for people to have an account with cocacola.com, tied to their Facebook or Twitter accounts)

Very soon, machines would develop their own popular custom flavors. Machines near each other can pick up flavors from the same geography. Local variations in preferences and popularity can turn into realtime market research and crowd sourced product development. Who knows? Maybe root beer with cherry syrup is a winner in East Texas? The best flavors can then efficiently be produced and promoted in geographies pre-tested by the Coke Freestyle network.

In this world, rather than devoting R&D effort to new brand extensions, Coke can focus on new base and accent syrups.

The Coke Freestyle, by virtue of being a networked device, can also promote drinks effectively and price dynamically. If there is a big push for Diet Coke Vanilla, it can be highlighted and discounted appropriately. More importantly, like Starbucks, members with accounts can get promotional discounts and rewards to keep them coming back to Coke.

Given the incredible market research and distribution benefits of the Coke Freestyle, pricing becomes a really interesting question. Compared to “dumb” vending machines, these networked devices might enable heavily subsidized pricing. Given the relatively lower marginal cost of goods for a fountain-based machine, Coke might be able to fundamentally alter the dynamics of vending distribution by deploying machines in shopping malls and high traffic locations and undercutting competitive machines.

Who is to say that they couldn’t offer drinks at 25 cents each? If the primary goal of the machines is to generate and test brand extensions, there is a powerful motive to generate a large a volume of frequent voting.

This is the real strategic question for Coke: are they willing to disrupt well known and established vending machine economics to build out a realtime market research platform? How much is this data potentially worth?

Does Coke Get It?

For the last few months, I’ve been trying to get network access to the Coke Freestyle to experiment with some of these concepts as a Hackday project. I was disappointed to find out that the machine currently has extremely limited services exposed over the network.

I hope Coke realizes what a winner they have on their hands with his machine.