Today, we had to say goodbye to a very special member of our family, Newton Nash. 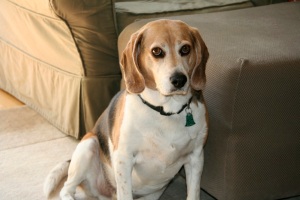 On December 2, 2002, I came home to find my wife waiting for me in the parking lot of our apartment complex.  I was immediately whisked away to pick up a surprise gift, a new beagle puppy.  There were a few puppies left in the litter, but I chose the one who peed when he saw us.  He was about eight weeks old at the time.

We picked a beagle because we lived in a small apartment at the time, but didn’t want to get a “toy” dog.  At the time, Star Trek Enterprise was still on TV, and I had asked Carolyn what type of dog Captain Archer had.  After meeting a few beagles at the local Starbucks, we were sold.

Newton was named based on an arcane naming convention matching three criteria: had to be a scientist, had to be an apple product or codename, had to end in “N” to go with Nash.

Newton was the first addition to our little family, which eventually added a second beagle (“Darwin”), and three children.  He was a 13″ beagle who grew up to be nearly 17″ at the shoulder.  He didn’t have a huge tolerance for party tricks, but could sit, stay, lie down, roll over and on a good day, do a military crawl.  Despite a somewhat extreme fondness for licking ears, he was incredibly gentle and playful with friends and strangers alike.

We knew our time with him was short, but didn’t realize it would be this short.  He will be missed.  I’ve posted a selection of photos from the last nine years below.  Many thanks to Eric Cheng, who took a few of the best shots over the years on his regular visits to suburban madness.