And make no mistake, it is a fiasco.

Here’s my interpretation of what happened. Please note, I have no factual data to back this up. Just comments from someone who has been reading the press like anyone else.

Apple wants the iPhone name. It begs. It pleads. It promises Cisco some case, and tie-ins to Cisco networking gear, and Steve promises to introduce Chambers to more of the cool crowd.

Cisco agrees in principal, and faxes over final contracts by Monday 8pm.

Steve feels like the deal is done, and doesn’t sweat the details of signing on the dotted line before the keynote.

Cisco tells Apple, it’s going to cost a lot more now. This violates Steve’s sense of fair play, and a lawsuit is born. The lawyers take over, and it’s all animosity until the posturing is done, and a richer deal for Cisco is worked out.

Dumb move, really, by Apple. Next time, sign the contracts or don’t announce the name. The product doesn’t launch until June anyway. You gave a fake name for Apple TV (iTV)… you could have done the same thing here.

Cool product, though! It would be cooler if it ran Skype…

Update (1/11/2007):  Jim Cramer has his own theory on what the lawsuit is about.  He thinks Cisco wants to force Apple to let it into the “cool” club…

I hate to say it, but I was disappointed with Macworld this year.

Don’t get me wrong, I love the Apple TV. I think I am going to buy four of them – one for each TV, and one for the minivan, that can synch at night when it’s in the driveway. All my kiddie videos are going into iTunes, so that my two year old won’t manhandle the DVDs any longer. I see a direct mapping between the success of ripping CDs and iPods with the ripping of DVDs and Apple TVs.

And, please don’t mistake my enthusiasm for the iPhone. It looks gorgeous, and once I can try out the touch screen, I’m very likely to get one.  There has been a lot of concern voiced by some friends of mine that Apple hasn’t opened up the phone for development.  My guess is, they will, at WWDC, but they don’t have it stable enough and/or the build environment ready yet. 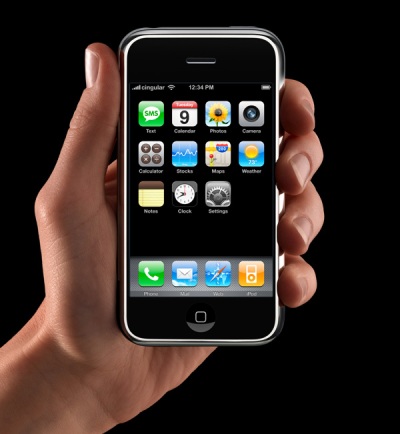 The problem was… that was it.

What was missing? No new software!

No iLife ’07. My number one application from both a time and enjoyment factor is iPhoto. Last year, I got to see iPhoto 6 for the first time, and it was fantastic. Made my whole 2006 better.

No Leopard booth! No Mac OS X 10.5 to discuss and play with… at least, not that I could find.

I guess I didn’t find the preview of Microsoft Office 2008 that exciting.

Oh well. I will share one new product I found that was better than expected: the new HP Color LaserJet 2605dtn. The price is great ($629). Two paper trays (one for paper, one for labels for PayPal postage printing). 10/100 Ethernet built in. Duplex. Rendering on the printer, not the computer. Fast. Great print quality.

It’s almost perfect, except for the manual paper feed that only takes one sheet at a time. If they fix that, I’ll be on my way to upgrading my 6-year-old laser printer to color.

And note to Apple – I didn’t expect iLife ’07, or iWork or Leopard to make the keynote. But I did want to see them at the show.

See you next year.

I had an alternate version of the title of this blog:

Diane Feinstein is a loser.

But I  had a problem when I discovered, today, in the San Jose Mercury News, that I would also need to add Carole Migden to the title, as in:

Back off Diane Feinstein & Carole Migden.

Hopefully, I went with the best version.  I hope, however, that Diane and Carole find their way to my blog somehow, to hear this simple message:

The 49ers are moving to Santa Clara.  Get over it.

San Francisco is a beautiful city.  I have a lot of friends who choose to live there, for various reasons.  But there days as the center of the Bay Area are long over.  San Francisco is on the periphery of Silicon Valley – more of a specialized niche for people who will give up weather and land for nightlife and long commutes.

The news about Diane Feinstein really pisses me off.  Last I checked, she was a US Senator from California, not San Francisco.  She has for more constituents who benefit from this move than those that lose out.

I will admit to not being a huge football fan myself.  The truth is, when the 49ers aren’t that good, I just don’t care that much.  I don’t watch college football.

But I grew up watching the Oakland A’s and the San Francisco 49ers, and I’m extremely excited about the fact that within a few years, I’ll be able to take my son to games so close to home.   The design of the Cisco Stadium looks fantastic for the A’s, and I’m assuming the new 49ers stadium will also be impressive.

San Franciscans usually brag about their access to culture – symphony, opera, museums, etc.  Consider losing the 49ers a good way to cleanse your city of the more mundane and brutish elements.

That’s better left to the vast majority of fans here in the Valley.  The study is kicked off, and no new taxes to pay for the stadium.  Now, that’s the Silicon Valley I love.