I am a huge supporter of space exploration, and a big fan of the recent boom of entrepreneurial activity around space. For example, I’m the type of person that gets excited when I see that the Blue Origin spacecraft managed a very successful test recently of their new launch vehicle. (Blue Origin is Jeff Bezos’ pet space company).

However, I have a special connection with the ongoing mission to Pluto, dubbed “New Horizons”. The spacecraft has been in the news lately because the ship will soon be passing Jupiter, on its way to rendezvous with Pluto (which is a planet).

I had a lot of success in individual speech events – my specialty were the variants where there was little to no preparation. Extemporaneous speaking was an event where you had 30 minutes to prepare a 7 minute speach on a topic, typically current events or policy. Impromptu, my favorite, gave you only 2 minutes to prepare a 5 minute speech on anything. Literally anything – a quote, a person, a place, an item. One of my best speeches ever was the final round of the Stanford invitational, where I won first place after picking my topic out of a Stanford bookstore bag (it was a condom).

One area where the team had struggled historically had been the annual, official statewide competition for policy debate. Unlike college invitationals, the state competitions tended to have “lay” judges – parents, friends, locals. As a result, winning had more to do with persuasive speech, and less to do with well thought out policy or evidence.

Our senior year, at the qualification tournament at Bellarmine High School, my partner and I had prepared a special case – one that was less technical, inexpensive, and incredibly compelling. It was a secret – we had never used it before at a tournament (we typically did 15-20 tournaments across the country, per year). The topic that year was space exploration.

The policy proposal? Send an unmanned spacecraft to Pluto. It was inexpensive (under $200M), obvious (it’s the only planet we haven’t explored close up), and it had urgency – there was a specific window in Pluto’s orbit that makes it economical to launch only once every decade or so. Pluto goes through a unique atmospheric event every 200 years, and it turned out that sending the craft immediately, in the next decade, made the most sense.

Not as grandiose as a moon base. Not as compelling as a manned mission to Mars. Not as exotic as developing solar sails. Not as economically valuable as beaming solar energy down from orbit to provide clean, inexpensive power.

But it won. And we qualified for the State tournament that year.

We didn’t end up winning the State championship that year, although I did pick up 2nd in the state in Extemporaneous. But I still look back on that case fondly; it was our last one.

That was spring of 1991. And as it turns out, it was a good idea, and we really are doing it. And now the ship is racing across the solar system, due for its rendezvous with Pluto… in July 2015, when my oldest son will be 10.

I don’t know why I found this story amusing enough to click on.  But I did.

Bizarre.  The things that I go through life happily not knowing… like the fact that Jessica Simpson has a “Dessert Treat” line of cosmetics & fragrances.

But now I do.  All because I tend to click on almost any article with eBay in the title.  Damn you, Google News.

Just for fun, I decided to see what eBay Express had to offer in terms of “Dessert Treat” products.   Pretty surprising selection, actually.  Over 1000 items for sale, and our new search engine even has “Dessert by Jessica Simpson” as a searchable brand in Fragrances.  Apparently, on eBay Express, Creamy Coconut & Cotton Blossom are the frangrances with the most listings, but Cinnamon Frosting is a close third. 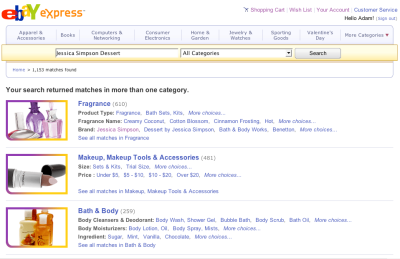 As for the Creamsicle Lipstick, well, I guess it’s technically “lip gloss” whatever that means.  But there are 27 items available on Express right now, as cheap as $2 with free shipping.

Now that this information is in my brain, possibly for a while, I can only hope that sharing it here will provide at least one person out there with some benefit – even if that benefit is a laugh or two at my expense.