Unfortunately, I rarely have the time to read the paper regularly during the week. As a result, I don’t often get to read the Science Times on the day it’s published. However, my mother just gave me a pile of the last 15 or so Science Times, and I’ve been reading through them. (Thanks, Mom!)

One article caught my eye tonight – it was the cover story on Pangea Ultima, Dr. Scotese’s name for his future estimation of the movement of the continents over the next 250 Million Years. 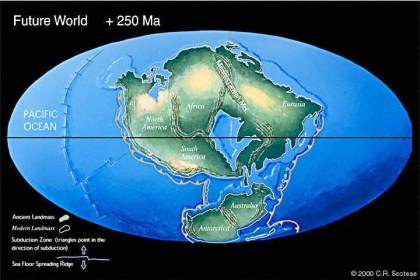 Dr. Scotese has a full website showing the continental configurations ranging from 200 Million years ago (Pangea), all the way through the modern world and beyond. This includes some nifty Java applets that actually let you rotate a 3D globe.

This site is the best – it shows you a drag-based animation of the next 250 million years, all the way to Pangea Ultima.

Very cool. Some tidbits from the analysis:

It turns out that our current understanding of planetary techtonics takes us more easily into the future of 50M years, and that the complexity of projecting beyond that is still very high. Still, it’s neat to see an informed attempt at the projection. It makes you realize how small & unique our little window into Earth’s history really is.

As an aside, Wikipedia, as usual, has an incredible write-up of Pangea Ultima. I’m beginning to use Wikipedia more than I use Google – I’ve even made it the default in my search bar in Firefox. Anyone else finding themselves using Wikipedia more often these days?

3 thoughts on “Pangea Ultima: A Look at the Earth in 250 Million Years”