This is hot of the newswire from the US Mint: 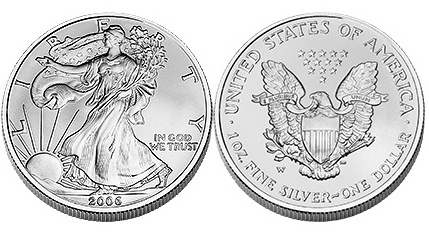 WASHINGTON— The United States Mint announced today that the 2007 one-ounce American Eagle Silver Uncirculated Coin will be available beginning at noon on Wednesday, June 13, 2007. Struck on specially burnished blanks, the American Eagle Silver Uncirculated Coins feature a finish similar to their bullion counterparts, but carry the “W” mint mark, reflecting their striking at the United States Mint at West Point.

The American Eagle Silver Uncirculated Coin bears the same designs as the bullion and proof versions. The obverse design features Adolph A. Weinman’s full-length figure of Liberty in full stride, enveloped in folds of the American flag, with her right hand extended and branches of laurel and oak in her left. The reverse design depicts a Heraldic eagle with shield, an olive branch in the right talon and arrows in the left.

Each coin is encapsulated in protective plastic and placed in a blue presentation case accompanied by a Certificate of Authenticity signed by the Director of the United States Mint, Edmund C. Moy.

Containing one troy ounce of .999 silver, the 2007 American Eagle Silver Uncirculated Coin will be available for $21.95.

Last year was the first year that this coin was minted. At first, most people ignored it, largely because uncirculated silver eagles are available from any bullion dealer, and the US Mint markup was substantial. Ironically, this led to extremely low sales volume for the 2006 coin.

Of course, it turns out that this is the only uncirculated silver eagle with the “W” mint mark, and as a result to complete a set every collector has to have one. The price went from $15.95 to $60 almost overnight on eBay when they were discontinued. I’ve seen them selling now for almost $100.

This is common knowledge now, so my guess is that the 2007 will sell briskly, ironically making it less valuable. I’ll still buy a couple, though. Just a sucker, I guess.