Break out the plastic, coin collectors. The new 2007 24K Gold First Spouse coins just went on sale at the US Mint today at 12pm EST.

Right now, there are four available:

Here are the proof & uncirculated versions, for comparison: 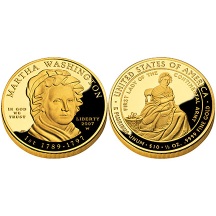 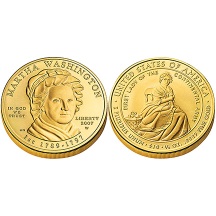 Four, one-half ounce, $10 24-karat Gold First Spouse Coins will be minted and released annually in the order the spouses served in the White House. The coins will be minted in proof and uncirculated condition and are available individually. Each First Spouse Gold Coin will coincide with the release of the four circulating Presidential $1 Coins annually. In 2007, the United States Mint will release the first four coins in the series which include: Martha Washington, Abigail Adams, Thomas Jefferson’s Liberty and Dolley Madison.

First Spouse Gold Proof Coins are available in limited mintages. Each 2007 First Spouse One-Half Ounce Gold Proof Coin is packaged in a custom-designed domed-chest, highly polished lacquered hardwood presentation case and accompanied by a Certificate of Authenticity signed by the Director of the United States Mint.

They are limiting mintage of each first spouse to 40,000 coins – interestingly, that is across both proof and uncirculated versions, so the ratio could be heavily skewed.

Assuming that you wanted to collect all of these coins, you’d be on the hook for nearly $32,000 over the next 10 years at these prices. I’m guessing that most people won’t go for that.

The hardest choice here might be whether to buy the proof or uncirculated versions. Given the low differential in price, it might seem like the proof coin is the most obvious choice. Aha, but that’s the problem! If everyone buys the proof, and no one buys the uncirculated, guess which one will end up the winner in collectible value?

Comment here if you collect coins… are you going to buy this set? Proof or uncirculated?

Update (6/21/2007): Wow. The coins sold out in approximately 2 hours on the US Mint website. Crazy. I’ve written a post about it, the current prices on eBay, and some of the commentary about it.

Update (6/26/2007):  I’ve posted the planned launch dates for the next two First Spouse coins at the US Mint.  Mark your calendars!